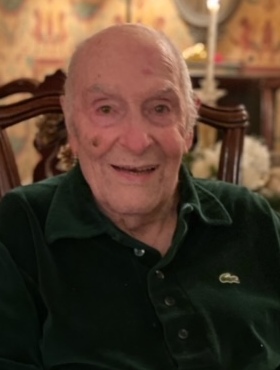 Gasper Joseph "Rocky" Graziano passed away surrounded by his family on November 15, 2022 in Denver.

A mechanical engineer by profession, Rocky was known for his never-ending quest for knowledge and problem-solving for others. A long-time resident of Evergreen, he was an active member of "The Curmudgeons," a group of retired professionals who were instrumental in bringing RTD senior transportation to the community and the construction of an accessible trail around Evergreen Lake, among other community improvements. As recently as this year, at the age of 95, he reached as far as The White House to propose HVAC solutions as a means to combating COVID spread in public buildings, even writing articles on the subject for an engineering publication.

Rocky was born March 14, 1927 in Jersey City, New Jersey, where he spent his childhood. He enlisted in the U.S. Army at the age of 17. After the Army, he earned his bachelor's and master's degrees in engineering, then started a 30-year career with Johns-Manville. He married Phyllis Anne Graziano in 1955 and they had four daughters. In 1972 the family moved to Evergreen, where Phyllis and Gasper resided until they relocated to Denver to be closer to their daughters in 2015.

In lieu of flowers, memorial gifts can be made to Seniors4Wellness, PO Box 361, Evergreen, CO 80437 or online at www.seniors4wellness.org

Share Your Memory of
Gasper
Upload Your Memory View All Memories
Be the first to upload a memory!
Share A Memory