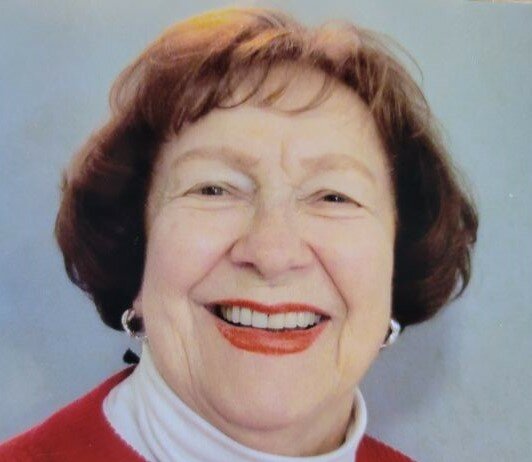 ZIMMERMAN, Ruth Anne, 93, of Thornton, CO., died peacefully on Saturday, November 12, 2022, surrounded by family. She was born on August 17, 1929, in Lebanon, PA, to George Shirer and Carrie May (Freyermuth) Brown. Ruth was a graduate of Lebanon High School and was crowned Miss Lebanon Valley in 1947. She attended Lebanon Valley College (Annville PA) on academic scholarship and graduated with a degree in science, the first in her family to go to college. She completed her medical technology residency at Mercer Hospital in Trenton NJ and graduate study at Cornell University. Ruth returned to Pennsylvania in 2014 to receive the Distinguished Alumnus Award for the Lebanon School District.

Ruth was naturally gifted at music, singing in church and school choirs, and studied voice and music education at Westminster Choir College (Princeton NJ) where her husband, N. William Zimmerman (Bill), graduated with a degree in choral conducting. Ruth and her husband served as educational missionaries for the United Methodist Church from 1954-1987 in Malaysia, Indonesia, Taiwan, and Singapore, where she taught voice and choral music at Morrison Christian Academy and Tunghai University in Taichung Taiwan, and at Trinity Theological College in Singapore, and as an elementary school music and art teacher at the International School of Singapore. As a certified instructor of the Orff-Kodaly teaching method, she gave demonstrations of this music education approach to teachers at the request of Singapore’s Ministry of Education. She also performed as a soprano soloist in numerous public concerts and church choirs throughout Southeast Asia and stateside under the direction of her husband.

While in the United States, Ruth was employed as a medical technologist at hospitals in Oklahoma City OK, Aurora and Denver CO, where she retired from the Denver VA Medical Center after 13 years and received the Volunteer of the Year award for beautifying the hospital’s many gardens. She was a longtime member of the Colorado Symphony Chorus and organized choirs and music classes at Park Hill United Methodist Church, Simpson United Methodist Church, and Trinity United Methodist Church. She was an active volunteer in her retirement community, the Villas at Sunny Acres in Thornton CO, where she lived for 22 years and coordinated monthly birthday dinners, her popular “golden oldies” concerts, new resident orientation, care of the gardens and grounds, and advocacy for residents on advisory committees reporting to staff.

Ruth was preceded in death by her husband, her parents and two older sisters, Jeanne Natalie (Brown) Dabich and Mary Louise (Brown) Moody. She is survived by her four daughters, Karen Zimmerman of Sarasota FL, Alisa Zimmerman of Broomfield CO, Deborah (Jim) Turner of Dover DE, and Cynthia (Mark) Mondo of Grayslake IL, three granddaughters, Hillary Lutkus, Abigail Turner, and Mimi Zimmerman, and numerous nieces and nephews. There will be a private inurnment at Olinger Crown Hill Cemetery in December 2022. A public memorial service will be held in Denver CO in 2023.

In lieu of flowers, contributions may be made in the name of Ruth Anne Zimmerman to the General Board of Global Ministries - the United Methodist Church at https://advance.umcmission.org/p-155-global-ministries-where-most-needed.aspx or to Lebanon Valley College at http://www.givecampus.com/campaigns/904/donations/new?donation_type=general

Share Your Memory of
Ruth
Upload Your Memory View All Memories
Be the first to upload a memory!
Share A Memory