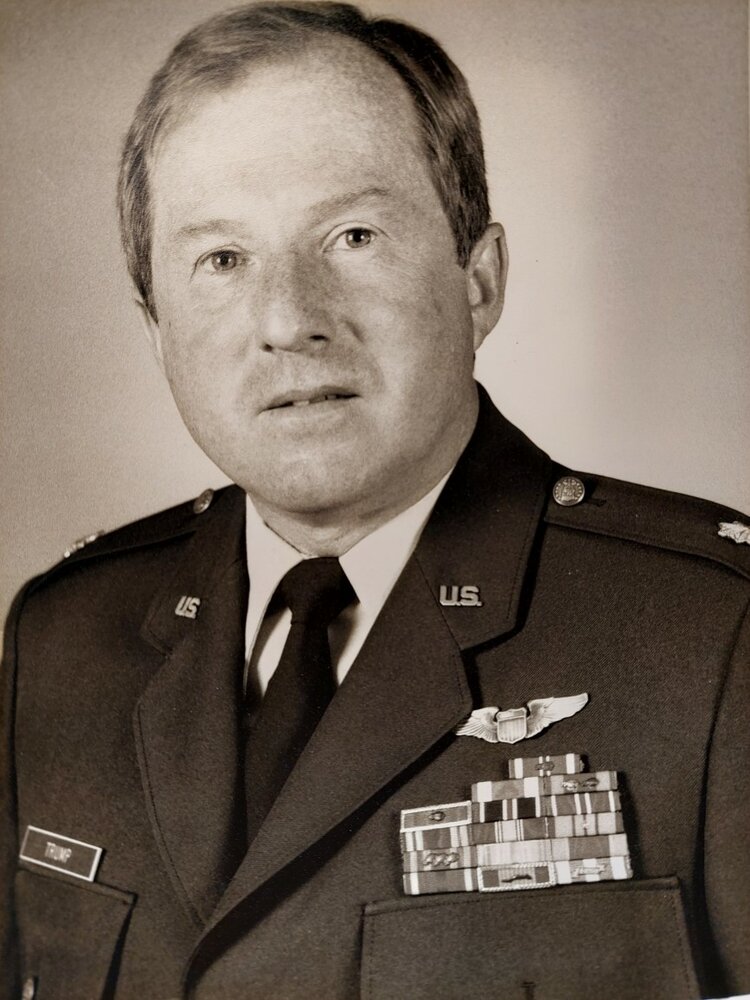 Lt. Col. William Edward Trump, Jr, was born on May 10, 1946 in Sayre, PA to William Edward Trump, Sr., and Edna Marie Herrick.  He passed away June 1, 2022 at his home in Colorado Springs, CO.  He is survived by his wife, Carolyn and sister, Sandra Gaffin.  Bill graduated from Fairview High School in Boulder and entered University of Colorado where he earned a B.S Production Management and completed Air Force ROTC in 1968.  He received pilot training at Vance AFT, Oklahoma.  He flew a C7-A Caribou in Viet-Nam with the 537 Tactical Airlift Squadron out of Phu Cat AB from December 1969 to December 1970. He was awarded two Distinguished Flying Crosses for heroism while encountering enemy fire and received four Air Medals.  In January 1971 he was assigned to Strategic Air Command and stationed at Grissom AFB, Indiana flying the Boeing KC-135 Stratotaker. He met his wife Carolyn while in Indiana and was married 2 months short of fifty years.  In September 1972 he participated in Young Tiger TDY in Thailand.   He separated after five years of active duty and obtained an MBA in 1975 from the University of Colorado.  He was employed as a district manager for Hertz Rent-a-Car and worked for several rental companies.  He entered the Air Force Reserves at the Air Force Accounting and Finance Center in Denver, Co.  He was awarded two Meritorious Service medals and retired in 2006.  Bill loved his CU Buffalos, The Beach Boys, his dachshunds Buffy and Buddy, and his home.  He was a loyal and loving man, with a fun sense of humor.  Services and interment will be at the Pike’s Peak National Cemetery 1 pm on Monday, June 27, 2022.  In lieu of flowers, donations may be made to the  Air Force Aid Society and Wounded Warrior Project.

Share Your Memory of
Lt. Col. William
Upload Your Memory View All Memories
Be the first to upload a memory!
Share A Memory