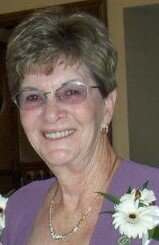 Ramona (Mona) Jeanne Nance Perez passed away, in her home, from cancer on June 7, 2022. She was born in Hiteman, Iowa on May 29th, 1937. She was preceded in death by her parents, brother, son Michael Lee Palmer (2012) and husband Dominick (Dom) Perez (April 24, 2022). She is survived by her sister, Carol Deborski of Louisville and her brother Frank Kuncis of Trinidad. She is also survived by her daughters, Brenda Palmer of Westminster and Cheryl Shepherd (Scott) of Lafayette, grandson Kellen Shepherd of Longmont, granddaughter Randi Baldwin (Patrick) and great grandsons Ryman, Callen and Chesney of Brighton.

Mona came to Lafayette Colorado at 6 months old. She went to school in Lafayette and graduated from Lafayette High School in 1955. She married Franklin Palmer in 1955, they divorced in 1965. She married George (Joe) Nance in 1967. Joe Passed away in 1993. She worked at various companies as a bookkeeper and secretary. She and Joe owned Olympic Lanes in Boulder Colorado until their retirement in 1977 then moved to Texas and settled in Arizona. Mona moved back to Colorado in 1993 after Joe’s death. Mona married Dominick Perez in 1999. Dominick passed away just over a month before Mona.

Mona enjoyed traveling with Dom, bowling, golfing (when she hit ‘em straight), dancing and karaoke. She was especially proud of being a member of the Boulder Women’s Bowling Hall of Fame. She made many lifetime friends during her bowling career as well as meeting her husband, Dom. Together they had fond memories of the fun times singing karaoke and dancing with their friends.

Mona loved being with her daughters, son in law and grandchildren and was especially proud to be a great grandmother (“GG”). They had many birthday (with oreos and chocolate covered cherries for the grandkids) and holiday celebrations. Thanksgiving will not be the same without her turkey dinner, especially her dressing.

Mona was a loyal, caring friend, loving, supporting wife, mother and grandmother. She will be missed everyday by her family and many friends. Gone from our sight but forever in our hearts.

Contributions can be made to the American Cancer Society or St. Jude’s Children’s Hospital

Share Your Memory of
Ramona (Mona)
Upload Your Memory View All Memories
Be the first to upload a memory!
Share A Memory