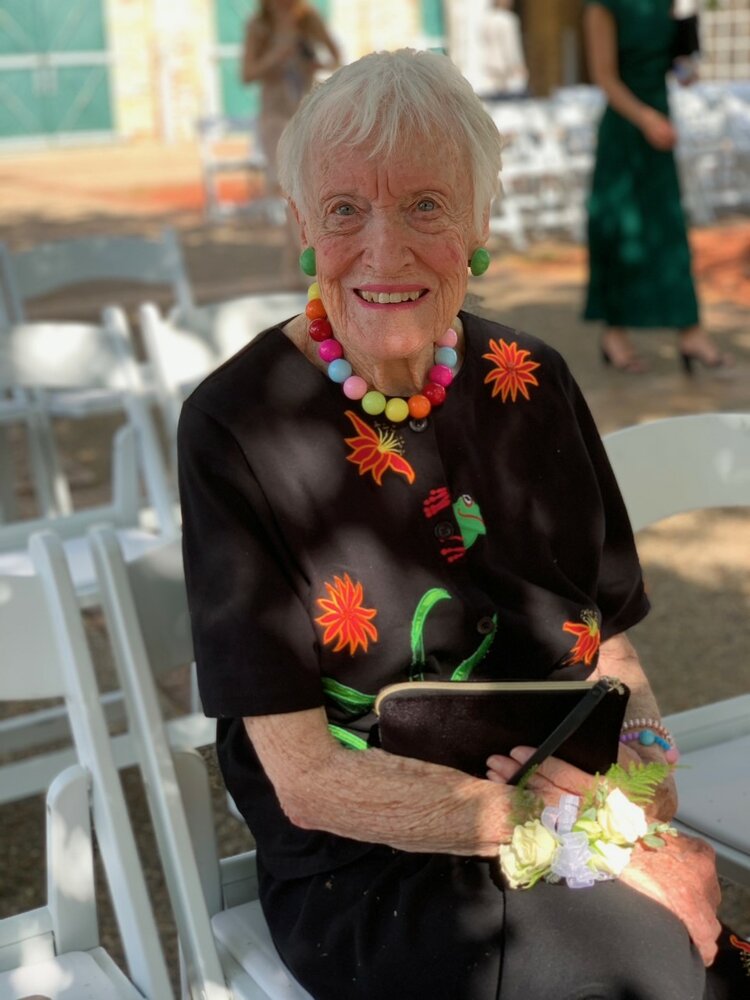 Mary Kathryn was born in Chicago, Illinois on Christmas Eve 1926 to Benjamin and Lois Poole. She was their second child, the youngest by 6 years to her brother Robert. Her family moved to Elmhurst, Illinois when she was a year old, which also included her Grandfather Franklin 'Frank' Poole. They lived in a home on Saylor Avenue with a back yard connected to a vacant lot that opened to Spring Road; the house is still there. Grandpa Poole planted a garden which spanned both back lots where they grew produce to share with all the neighbors. Mary also had pet ducks, a family dog and an amazing dollhouse with electric lights and furniture, all hand made by her father. Across Spring Road was Epiphany Lutheran Church where Mary K. was the oldest living original baptized member; baptized September 28,1930. She attended nearby Lincoln School while also excelling in art lessons, music (piano) and dance. In 1936, at the age of 10, her family lost their home due to the depression, moving to an apartment back in Chicago. She remembered the sadness of having to leave behind the dollhouse her father made when they moved.

After returning to Chicago, Mary's father Benjamin contracted Tuberculosis while her mother Lois had several surgeries with complications, resulting in her hospitalization. In order to make ends meet, the family rented out one of the bedrooms to two young women working in Chicago. At a very young age, Mary was beginning a vocation of care-giving that would continue well into her 90's. She would share stories of how it was for her to go to school, care for her Grandpa, manage the boarders with their needs of laundry and meals, only to then take two different street cars after school to visit her parents in separate hospitals; All the while remaining on the honor roll at school. Once her father was transferred to a Tuberculosis sanitarium, she could no longer visit but only see him from his window and wave. He died in 1942.

Mary K. was confirmed in her faith at Calvary Lutheran Church on March 17, 1940. She attended Carl Schurz High School, graduating early at age 17. After graduation, she went to work for the O.P.A. (Office of Price Administration) in the ration card department. Mary often told of the adventures with her girlfriends to Navy Pier, dancing the Jitter Bug with the servicemen during the war. On September 20, 1947, she married Richard 'Dick' Hanson, a friend from her high school days, and moved into her mother's apartment. In 1951 the Hanson's built a new home in Elmhurst on Wilson Street, mere blocks from Mary's childhood home on Saylor Avenue. They moved her mother in with them, where she lived until her death at 103 years old. The Wilson Street neighborhood became family and they remained close the rest of their lives.

Daughter, Lois Ann, was born in 1948, and son Gary Richard in 1953. Mary Kathryn’s life in Elmhurst was filled with active service in her home church, Epiphany Lutheran; including Bible study, teaching Sunday School, Vacation Bible School and later as a youth counselor with her husband. In later years she served in women’s circles and as a Stephen’s minister until she was unable to drive at age 91!! While serving as youth counselors (as their children were in that age group), they decided to buy a used school bus to transport the kids to their 'Luther League' basketball games, as well as camping retreats, and other outings. They worked out a fund raising idea to buy the bus by collecting filled-up S & H Green Stamp books, redeeming them for their cash value. Dick built a large full-color scale model of the bus that the booklets could be dropped into and it was a great success. He was also the bus driver for many years.

Mary and Dick were also active in their kid's schools, serving on the PTA boards and as a Girl Scout troop leader. They enjoyed square-dancing and a close group of friends from their high school days that met regularly throughout the rest of their lives. In every sense of the word, Mary K. was a Homemaker. She continually sewed clothes for her children and made great costumes, even for her mother and mother-in-law to wear on Halloween! Mary was always baking bread (her famous Swedish sweetbread or cinnamon rolls), or making vegetable soup to give out as comfort food to anyone who was ill or needing encouragement. As her daughter, I was brought along on these 'missions of mercy', which also included regular hospital and nursing home visits. She actually had days of the week assigned to certain individuals. For example, she would say, “I’ll be visiting my Tuesday lady today, if you want to join me”. I was blessed in that school of care-giving alongside my mother. We are now getting sympathy cards from some of the children of those she cared for over the years. Many remembering her sweet signature gift of bringing a rose floating in a glass bowl.

When the Hanson's married, Dick worked for a rubber company and continued for many years. He eventually started his own industrial rubber business in the 60's. Mary worked alongside her husband during those years as the company's bookkeeper.

Mary and Dick enjoyed many travel highlights which included Bermuda, the Holy Land, Hawaii, Hong Kong and China; even a ride on the Good Year Blimp over Chicago. Closer to home, there were house-boating adventures in northern Wisconsin and spring trips to the gulf side of Florida. The 1974 purchase of a lake cottage in La Grange, Indiana became the annual family meeting spot, enjoyed with friends and family for over 20 years.

In 2005 the Elmhurst house was sold and Mary moved into a senior living condo in Downers Grove, making new wonderful friends. She enjoyed creating a beautiful garden on her patio with her love of geraniums and flowers. In 2019 she moved to Denver, Colorado to live near her daughter. In her senior living center, Mary loved the Tuesday night music event, frequently dancing with her daughter Lois, dressing up for Halloween and again, making many new friends that she loved spending time with. She also enjoyed regular visits to the lake near her daughter's home, watching the geese and having picnics. Every dog was a friend...even sitting on her lap!

Mary Kathryn Poole Hanson was a unique child of God; He gave her the amazing energy for this very full and blessed life! Her twinkle-in-the-eye spirit now resides in heaven.

Share Your Memory of
Mary
Upload Your Memory View All Memories
Be the first to upload a memory!
Share A Memory