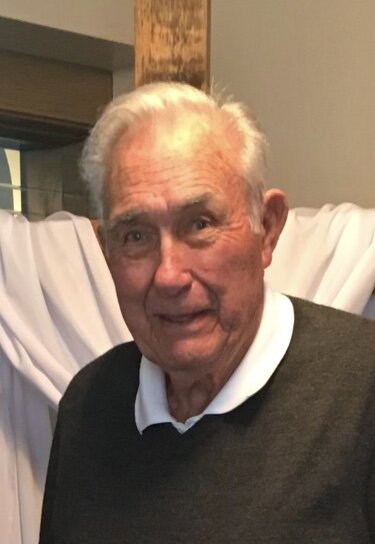 Merle was born on April 22; 1925 in Woden, Iowa. His family moved to Titonka, Iowa. Merle enlisted In The Navy at age 17. He served in the United States Navy in World War II as a Boatsman Mate Second Class on the USS Rutilicus. Merle always called it the USS Ridiculous! He was interviewed by the Department of Veterans Affairs for the Veterans History Project. This interview is still on their website.

Merle attended The University of New Mexico where he received a Master’s Degree. From 1948 to 1950, Merle played guard on the basketball team; his teammates called him Moose because he was so tall.

Merle loved to play golf and he was good at it; he got a hole in one! He worked at The Meadows Golf Course until he was 93! Merle was always either on the golf course, the driving range, the basement of the house practicing his putting, or swinging his golf club in the house.

Merle is survived by his beloved wife of 50 years, Barbara. Merle and Barbara would play golf together a couple days a week. They took many memorable golf trips.

Memorial gifts may be made to

Lobos for Life Men’s Basketball Fund at The University of New Mexico.

Share Your Memory of
Merle
Upload Your Memory View All Memories
Be the first to upload a memory!
Share A Memory