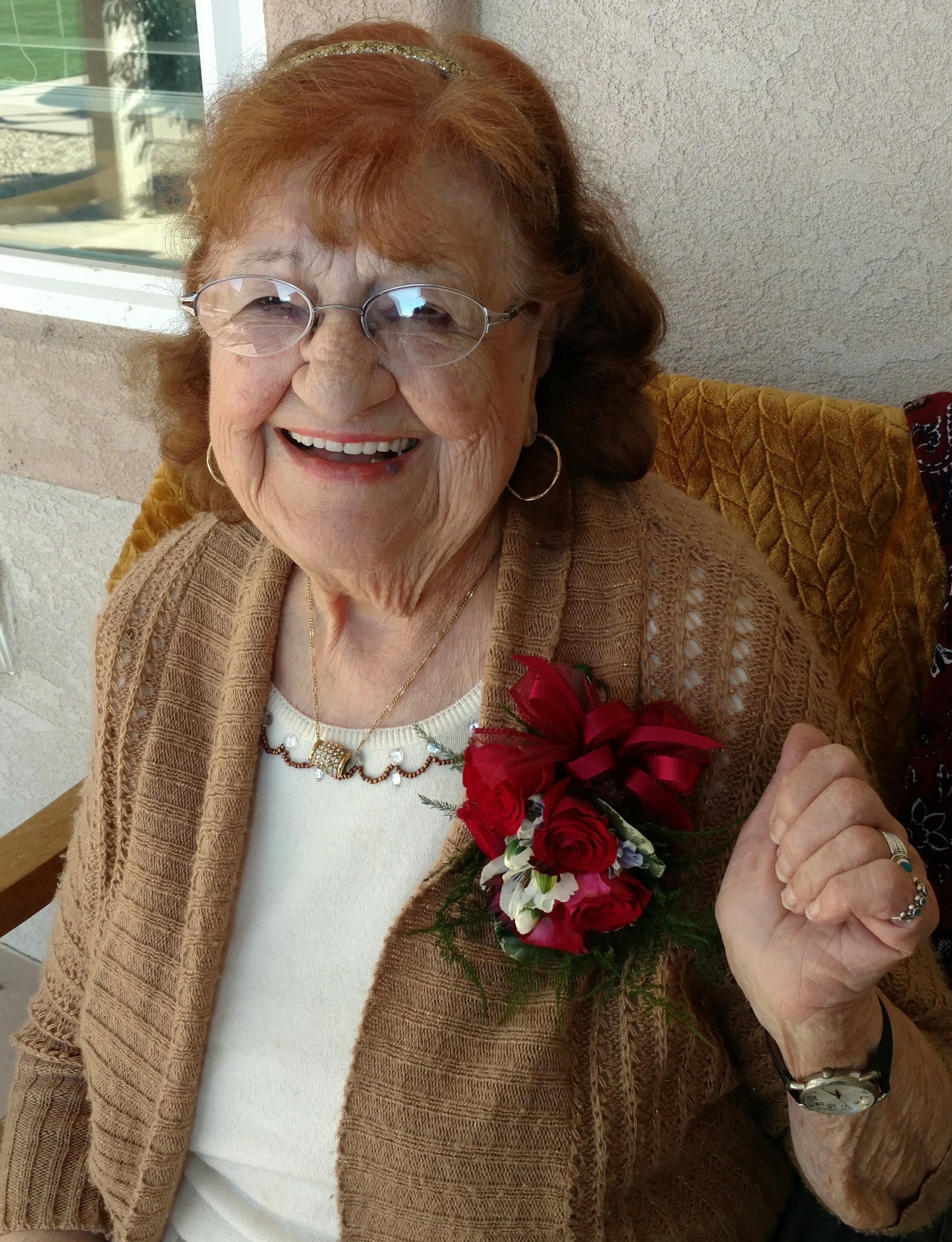 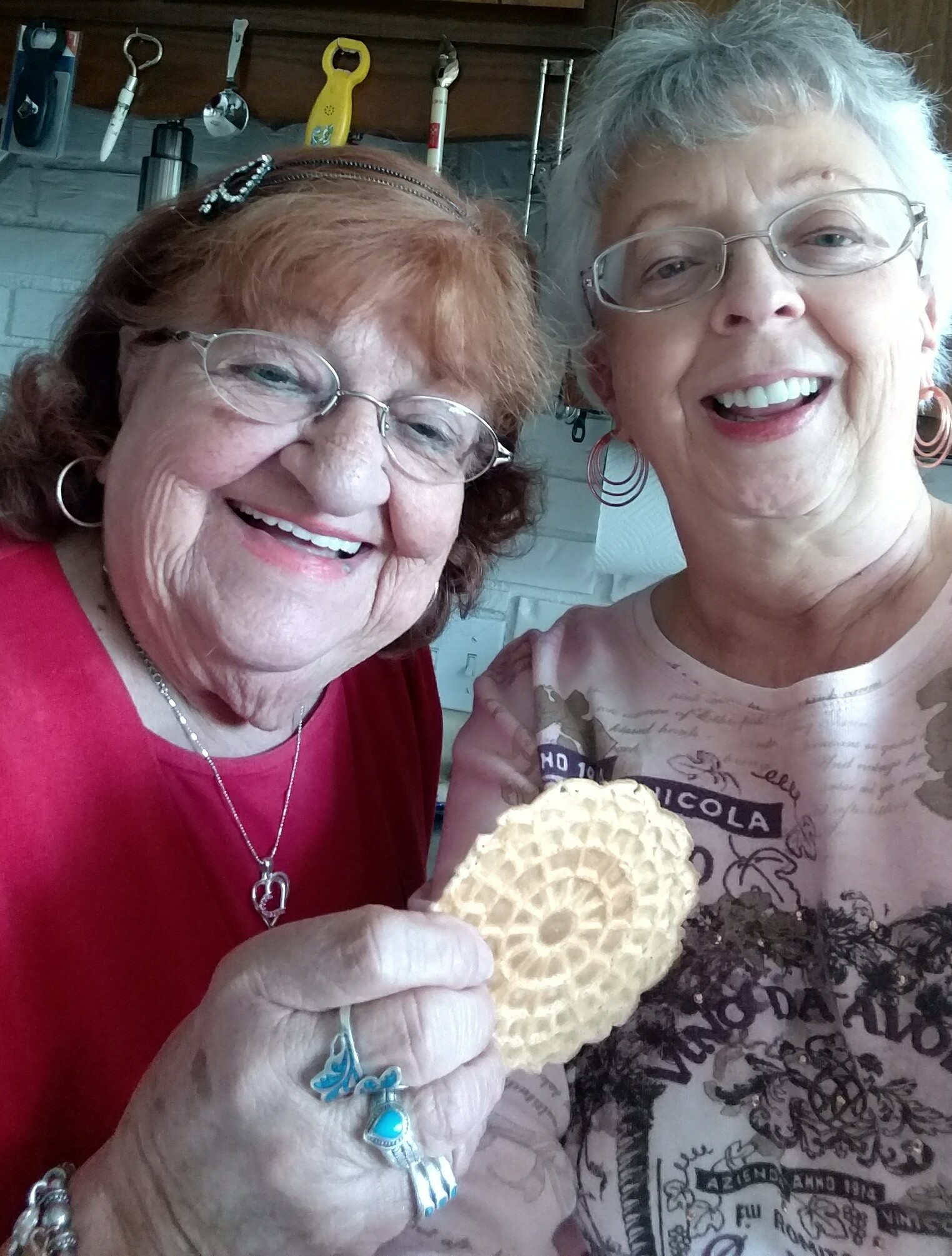 Vincenza “Gen” Genevieve Vallese Evans was 98 years old when she passed into Heaven on Wednesday, October 6, 2021. A long-time resident of South Bend, IN she was traveling to California with her daughter when she passed away. She had been in Colorado Springs to go to her grandson’s wedding.

Born in Providence, RI on September 24, 1923 she was the youngest of 8 children and grew up in a strong Italian family. Her parents and their families had immigrated from Teramo, in the province of Abruzzi, Italy in the late 1890’s. She graduated from George Waterman High School and went to work for the U.S Rubber Company. She started out working on the golf ball conveyor, but during WWII they switched to any rubber supply the armed forces needed for the war. She met her husband, Gene, at the USO in Newport RI, where she served as a Hostess. They were married on Sept. 27, 1952. After honeymooning in Niagara Falls they set up residence in South Bend. Her husband was born and raised  on a farm in Shelby IN and had secured employment with Western Bell. Their first home was on Kern Road.

Son Tom was born in July 1953 and daughter Joan was born in Jan. 1956. Eventually the couple looked for a larger home and they moved to Dice Street in 1961. A new puppy, Chubby Checkers, also moved in and Gen set up their yard as a gathering place for the neighbors. They were members of the First Methodist Church in downtown South Bend. Being members of the Mr. and Mrs. class, Gene was able to find new employment with the Bendix Corporation, where he stayed until retiring.

A second daughter, Jane Kay, was born in Nov. 1964. At age 3 she was diagnosed with leukemia. To help with medical costs, Gen returned to work, finding employment with the South Bend School District. She worked in the cafeterias of elementary schools. Hamilton and Marshall, and high schools, Jackson and Marion in Mishawaka.

In 1969 they bought property and had a new house built on York Road. It was their dream home – a split-level sitting on a quarter acre of land. Gene was able to use all his building and fixing skills, and Gen was able to become a garage sale ‘addict.’ Sadly their youngest, Jane Kay, passed away in Nov. 1969.

Gene took early retirement in 1986 and they moved to Colorado Springs, CO, to be closer to their two grandchildren. Gen went to ‘college’ (a two-week food course) and became the Manager of the Cafeteria for a new high school. After her husband’s passing in 1988, Gen returned to South Bend and to the cafeteria of Marion HS in Mishawaka. She delighted the staff and students with her black-and-white saddle shoes. She would spend most of her free time traveling to Colorado to see her son and his family, and spent her Summers in California to see her daughter.

Gen was known for her fancy headbands, her red hair (“just like Lucy – it comes right out of a bottle”) and the fact that she was always dressed up. She attended Southside Baptist church where she loved serving food for Vacation Bible school, Senior lunches and loved her adult Sunday school class. She found her ‘gang’ at McDonalds, which she called her “hangout” and spent every morning there telling jokes and discussing the news. They all knew Gen had to leave before 1pm to go home and watch “Gunsmoke.”

She loved her Lord, her family and friends, collecting dolls and decorating her house with “memorabilia.” Gen volunteered for many years with Catholic Charities. She made hundreds of quilts and other sewing projects. For her “If it ain’t Glen Miller, it’s not music” was her favorite answer when asked what she liked. She was the “life of the party.” Not just for her sense of humor but for her delicious Italian cooking.

Gen hated growing older – so she didn’t! She would answer the age question with “I’m as old as anybody my age.” Her children were known to tell their friends “I could tell you but I’d have to kill you.” It was a family secret for many years, and she always said she didn’t know why she had been blessed with such a long and healthy life. We were the ones blessed to have her in our lives.

She was preceded in death by her parents, Dominic Vallese, and Vincenza DiFlippo Vallese, her siblings: Willie, Lena, Suzie, Joe, Albert, Annie and Tom, her husband Charles E. “Gene” Evans, and her daughter Jane Kay. She leaves a son, Thomas Evans, daughter, Joan Evans, grandchildren Salem Evans and Nathan Evans, nephews and nieces, and many friends. A Celebration of Life will be held in early Summer 2022 at Southside Baptist Church. In lieu of flowers please consider making a donation to StandUptoCancer.org or St. Jude Children’s Research Hospital at StJude.org.

Make checks payable to Stand Up To Cancer. If you would like to include a tribute to a friend or loved one, you can indicate this in a note enclosed with your check. Tax receipts will be sent via USPS regular mail. This can take between 4-6 weeks. Checks should be mailed to:

Share Your Memory of
Vincenza
Upload Your Memory View All Memories
Be the first to upload a memory!