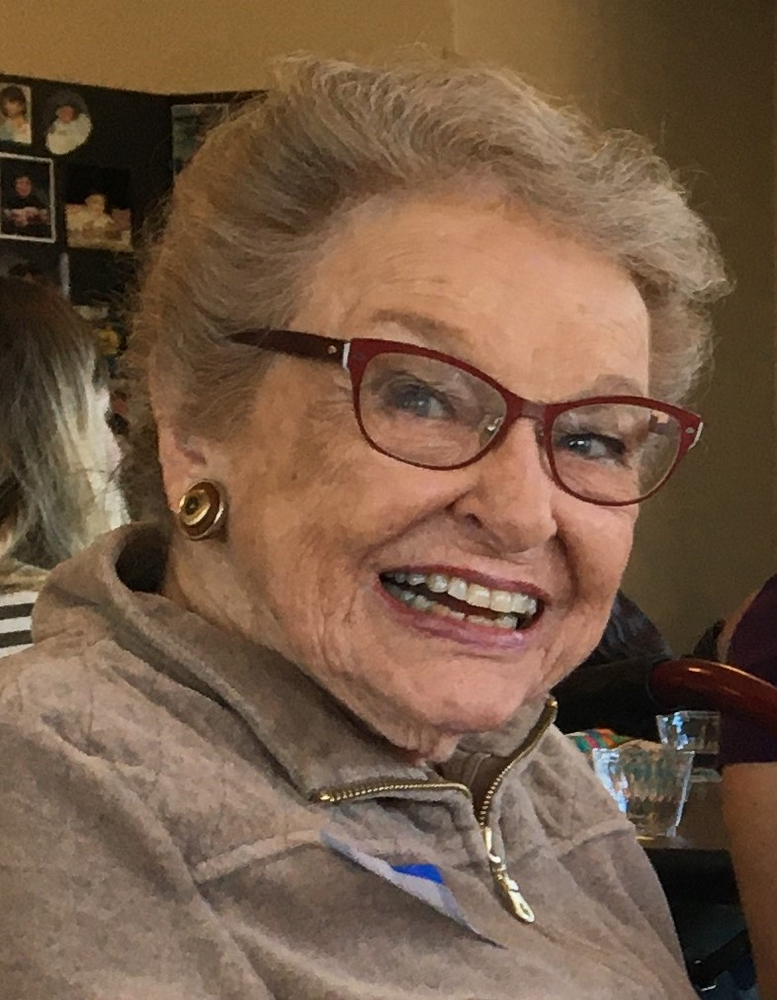 Born and raised in Sacramento, CA, Dale graduated from the University of Colorado in 1950, where she met her beloved husband of 64 years, Robert W Blaha (deceased). She was an artist, interior designer, active Delta Gamma member and Rocky Mountain Assoc of Geologists Auxiliary member to the end, and great friend to many! Dale was the mother of Karen (deceased), Dan, and Sandra Blaha Bond; grandmother of Max (deceased) and Tom Bond; beloved aunt of John Whitaker (Maria), Debbie Whitaker Munch, Cindy Blaha Casey, Chas Blaha; beloved great-aunt of Andrew and Dani Whitaker, Joey and Evan Casey, and Emily Blaha Zapata; daughter of Alfred and Bernice Baker Whitaker (deceased).

Dale and her brother Andy grew up camping in the Sierra Nevada mountains and steelhead trout fishing on the Klamath River in Northern California with their parents. Al and Bea were avid outdoor and fly-fishing enthusiasts.

During the Depression, the Whitaker family rented their house in Sacramento and moved to the suburb of Woodlake, where they occupied and ran a boarding house along with Dale’s grandmother, Hazel Baker. The family lived in one large room on the top floor and rented rooms to the single men working in the area. Bea was a great cook and everyone sat down to dinner together, along with other men who just took meals there. Dale and Andy loved these men, who played with them and taught them to tap dance. With a pool nearby, Dale learned to swim at age 4. She became an excellent swimmer and as an adult, taught blind children how to swim through her Delta Gamma (DG) sorority activities. She did this from when her three kids were young (we remember going with her every Wednesday morning each summer) until the late 60s.

Dale was also quite involved in the Anchor Center for Blind Children, which she and her sorority sisters established in 1982 along with a local librarian. Parents of blind and visually-impaired children can take their children, from birth to five years old, to Anchor Center, which aspired to “set the standard as a nationally recognized leader in developmental, educational and support services for children who are blind or visually impaired as well as the families and professionals who serve them.” Anchor Center continues today as an exemplary model of a school for blind and visually-impaired children.

In addition to her long-time involvement with the DGs, from which she had an extensive circle of friends, Dale helped establish the Rocky Mountain Association of Geologists Auxiliary (RMAGA), the wives’ group of the RMAG men (it was the 50s). This also grew into an extensive circle of friends, and Dale and Bob had an amazing social life—parties, dancing, singing, skiing, Aspen and Vail get-a-ways, sailing in San Francisco Bay with her dear friend and cousin Jeanne Lacey and her husband, and in the Bahamas with friends, and considerable political and charity work—during their 64-year, wonderful marriage. Theirs was a true love story from the beginning.

Dale and Bob loved camping and skiing with their 3 children and 2 grandchildren, and did so into their 70s. They also loved to sing (especially Bob) and were both great readers. Dale relished sitting in her chair and reading for hours in her later years. The depression in the seat of her chair is testament to this.

Dale passed away peacefully at home, with her children, grandson and great-nephew at her bedside. She was ready to see Bob, Karen and Max, again. She will be missed by so many who admired and loved her fierce and passionate spirit. R.I.P.

Share Your Memory of
Dale
Upload Your Memory View All Memories
Be the first to upload a memory!
Share A Memory