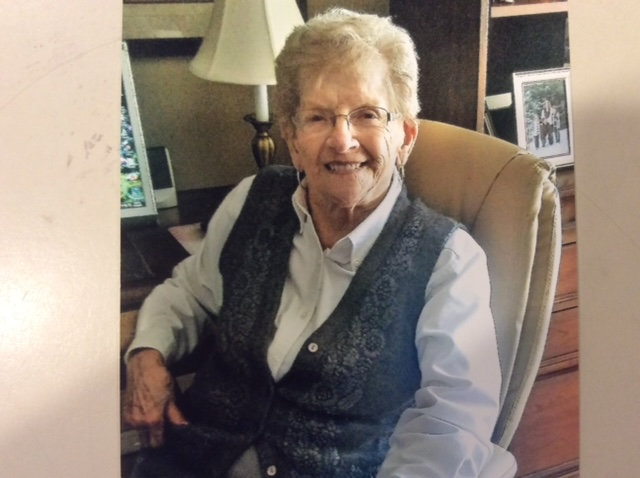 Dorotha Marie Miller was born on October 30, 1923 to John and Katie Miller in Norfolk, Nebraska.  Her parents had immigrated to the United States when they were both very young from a Volga River German colony in Sartov, Russia.  She was the 5th child of six siblings: sisters Vera and Elaine, brothers Robert and Leo and a younger sister Barbara.

She lived her younger life in Norfolk where her father was a carpenter and cabinet maker and her mother was a homemaker.  She attended Norfolk High School and her big claim to fame was attending school with Johnny Carson.

She met Vern Whalen when he was introduced to her by one of his brothers.  While they were courting one of their favorite pastimes was roller skating at the local roller rink where Vern worked.  Apparently they were quite good at it and could really get around the floor.

They married on January 17, 1944.  Vern was a Sergeant in the Army and Dorotha traveled with him to New York where he left for service overseas.  She returned to Norfolk to await his return.

Dorotha worked as a sales associate (apparently this is the new term for a salesperson) at the JCPenney store in Norfolk and Vern was the advertising manager for the local newspaper. They held these jobs for most of their adult lives in Norfolk.

They both loved playing cards, especially bridge, bowling and later on took up golf. Summer vacations were spent in Denver visiting family or going to Minnesota for fishing trips with a whole gang of family and friends.  Those fish were never safe when that group of people congregated!

In 1963 the family moved to Denver for a career opportunity for Vern.  It was quite a change for Dorotha and Vern who had spent their entire lives in a small town but since Vern’s brother and family lived there it wasn’t long before they made life long friends.

Dorotha returned to work but this time at the Sears store in Cherry Creek. She worked there for many years and then returned to Penney’s in the Aurora Mall until she retired.

Vern and Dorotha continued to enjoy playing golf and spending time with friends.  There were fun trips to Vegas, parties, and of course more card games.

In 1979 they moved to Heather Gardens to the Country Place patio homes.  Their good friends Marge and Don lived next door.  They both said it was the best move they had ever made.  They enjoyed the people, the club house, walking with friends, swimming and lots more golf.  And no more lawn care or house maintenance.  It was perfect.

After Vern passed away Dorotha decided to move to one of the condo buildings in Heather Gardens.  Scott and a friend remodeled bathrooms and the kitchen and painted the whole unit.   Cindy and Dorotha has so much fun buying new furniture and decorating her new condo.  Dorotha loved living there.

While she was there she gained a whole new family.  She became part of several card groups, was a regular visitor to the jigsaw puzzle table, and chatted on a daily basis with people in the building.

In 2020 at the height of the virus outbreak Dorotha felt it was time to move to assisted living.  She had a great little apartment at Garden Plaza very close to her former residence.  Unfortunately Covid restrictions kept her from visits from family and friends and activities outside of the building.  It was a lonely time but she managed and kept up with the outside world by phone and email. She had a puzzle corner, lots of books and tv.  It was a relief when things calmed down and she could have visitors again.

Dorotha’s life was full.  She enjoyed crafts and went through many phases:  ceramics, jewelry making, crocheting and others.  She was an excellent seamstress and was always willing to hem a pair of pants  or make repairs for someone.

She enjoyed trips to Vegas, Washington state to visit Connie’s family, Canada, a trip to Hawaii and of course frequent trips to the “Hill” for a little gambling.  She loved spending time with her family and friends.

She was baptized and confirmed in the Lutheran church and her faith was very important to her.

Dorotha was the longest surviving member of both sides of the family.  She will now join them.  She is survived by her children Connie (Bill) Waddington of Bainbridge Island, Washington, Cindy (Skip)Jensen of Aurora, Colorado and Scott (Lori) Whalen of Phoenix, Arizona. She had four grandchildren: Jamison Jensen,Jodi (Jensen)Griffin, Jeffery Jensen and Scott Waddington.  She also had two great grandchildren:  Logan and Taylor Griffin.  She adored them all.  And they adored her as well.

She left this world just as she wanted.  She saw all her children, she ate ice cream, and she slipped peacefully away in her sleep.

We will miss her and we are sad but we don’t grieve.  She lived a long and good life. She was loved by many.

Share Your Memory of
Dorotha
Upload Your Memory View All Memories
Be the first to upload a memory!