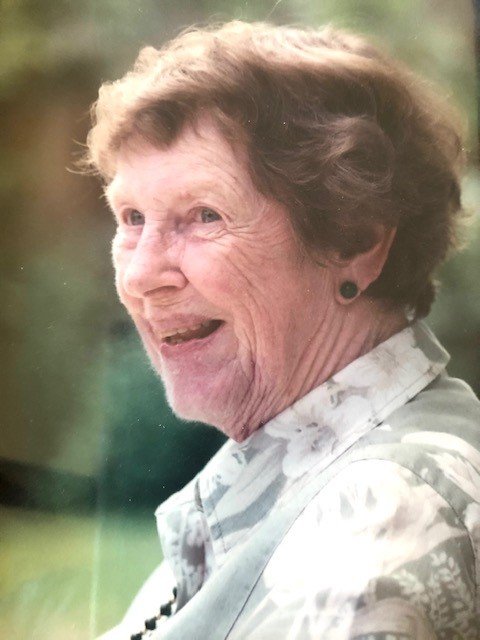 She would never have thought of herself as remarkable, but Margaret Barksdale Stansbury Durbin was precisely that. Born in May 24, 1919 in Conyers, Georgia to Thomas Haynie Barksdale and Margaret (Guinn) Barksdale, Margaret passed away peacefully January 31, 2021 at her home in Colorado Springs.

Bright, insightful, witty, and unfailingly kind, Margaret was a treasured friend to many. Always more interested in other people than in herself, she made lasting friendships all during her long life - with her fellow Wave officers during WWII, with the teachers and students wherever she taught, with the artist friends she painted with during her time in Cripple Creek, with the residents and staff she shared her last two decades with at Cheyenne Place, and even with the babies she rocked each week for more than a decade at Fort Carson.

After her childhood in rural Georgia and graduation from Georgia State College for Women (now Georgia College and State University), Margaret began a career as an elementary teacher. Shortly after Pearl Harbor, she followed her two brothers into the armed forces when she was accepted into the first class of officers for the newly established Navy WAVES. During the war, she met and married Cyril Berkeley “Dig” Stansbury, an officer in Britain’s Royal Navy. After spending five years in post-war England, Margaret and her husband relocated to her native Georgia and then moved to North Carolina where they raised their three children, and Dig became a naturalized US citizen.

Ten years after her husband’s untimely death at the age of 52, Margaret married Harry Durbin in 1980. Together the couple traveled all over the US, where Harry found something interesting at every stop and patiently let Margaret poke around almost every antique store between NC and Alaska. In 1984 they moved to a home situated on a mountain top in Cripple Creek, Colorado where they enjoyed spectacular views, a host of new friends, grandchildren who loved to visit their mountain retreat, occasional trips to Cripple Creek casinos, and more than occasional visits from bears in the area. In 2004, the Durbin’s moved to Colorado Springs and settled at Cheyenne Place. After Harry’s death in 2007, Margaret remained in the place where she had made so many good friends and made it her mission to partake of every activity available from bingo and bridge to book club and yoga.

Margaret is survived by her children, daughters Dale Bernard and Susan Mroch (Tom) and son Richard Stansbury (Marilyn); five grandchildren; and eleven great-grandchildren. She is also survived by numerous nieces and nephews and a large, boisterous and far-flung family, all of whom loved her dearly and all of whom were a special delight to her. At the celebration of, “ her 100th birthday in 2019, Margaret looked around the crowd of friends assembled from several states, two countries and a lifetime of memories and said, “I don’t know what I did to deserve this … but I must have done something right.” She certainly did … in every way, hers was a life well-lived.

At Margaret’s request there will be no service. Memorial donations may be made to The National Audubon Society to honor her love of birds or to your local food bank.

Share Your Memory of
Margaret
Upload Your Memory View All Memories
Be the first to upload a memory!