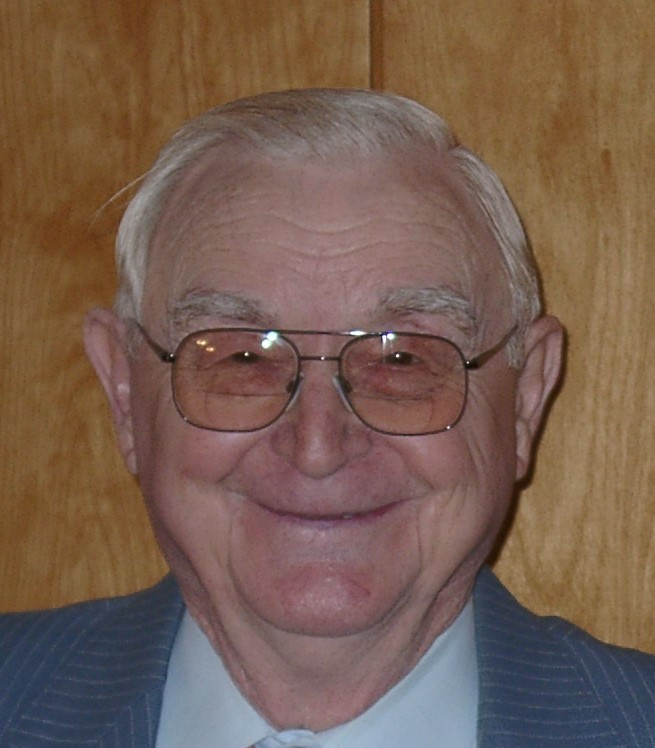 Lloyd Louis Carda, age 95, passed into history on October 15, 2020 after several months of declining health, followed by a COVID-19 infection. Lloyd is remembered with love by his extended family, and by many friends and neighbors - all were “family”.

Lloyd was born to Louis and Georgina Carda on August 30, 1925 in rural Wagner, SD. One of six children, he grew up on a farm. He attended school in Ravinia, SD, graduating in May of 1943. Lloyd joined the U. S, Navy on November 11, 1943, seeing action as a Seabee during the June 6, 1944 D-Day landing at Omaha Beach. In his later years, as he remembered that day, he reminisced about his experiences and said that he somehow “knew” that he would survive and return home. Thankfully, he did in April 1946.

Lloyd married Viola (Vi) Thaler in February 1949. They had three children (Wanda, Steven, and Michael). Lloyd furthered his education at Southern State Teachers College in Springfield, SD and taught country school for a short while. He and his brother operated Carda’s Standard Service Station in Wagner for several years. Lloyd also worked at the Farmers Coop and was responsible for their accounting operations.

In 1962, Lloyd and Vi moved their family to Denver, Colorado. He continued to further his education taking courses in accounting. Lloyd was employed by Aspen Airways for many years as an officer and Vice President, Finance. He retired in September,1987.

Lloyd enjoyed gardening; baking bread, kolaches, cookies, cakes, and pies; and canning pickles, fruit, and meat. He loved having family over for meals, especially Thanksgiving Dinner. He was a “master” when it came to making gravy. He bemoaned that he never was able to make baking powder dumplings as good as his mother’s or his sister’s. One of his most cherished traditions was making hundreds of gingerbread and sugar cookies every December and decorating them with his grandchildren and great-grandchildren. He enjoyed reading, doing puzzles, spoiling his beloved dog(s), talking with neighbors, connecting with family and friends, and “smelling the roses”. Lloyd excelled at numerous card games (especially cribbage) right up to his entry into long term care. He played to win.

Lloyd was the proud and loving father of three, grandfather of twelve, and great-grandfather of twenty-one. He cherished each member of his family and often said that “I have the best family in the world!” In reflection of his caring, loving, and friendly nature, all found it quite easy to honor him frequently with the words, “I love you grandpa”. He treasured the cards and artwork he received over the years from his children, grandchildren, and great-grandchildren.

Christopher and Lily Aquinto; Dillon, Kaylee and Renee Taunton; Sarah, Samuel and Daniel Karl; Kiara and Kian Haynes; Liam Tracey; Catherine and Finley Crotty; and Jackson and Quinn Mahedy; brother-in-law, Charles Thaler; sister-in-law Shirley Carda; and several nieces and nephews. Lloyd was a loving and caring man with a big smile who lived by the words: “Be kind”.

Lloyd was predeceased by his loving wife of 57 years Vi (2006), his son Steven (2020), daughter-in-law Janice Carda (2020), his parents, five siblings, two sisters-in-law and several others of his generation.

Lloyd will be laid to rest at Fort Logan National Cemetery after a Military Honors Ceremony on October 23, 2020. A celebration of his life will be held at a later date.

In lieu of flowers, gifts in Lloyd’s name can be made to the Denver Dumb Friends League, the Ft. Logan All Veterans Honor Guard, or the Honor Bell Foundation.

To send flowers to the family or plant a tree in memory of Lloyd Carda, please visit Tribute Store

Share Your Memory of
Lloyd
Upload Your Memory View All Memories
Be the first to upload a memory!
Share A Memory
Send Flowers