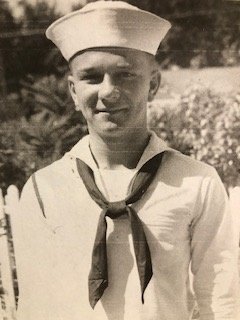 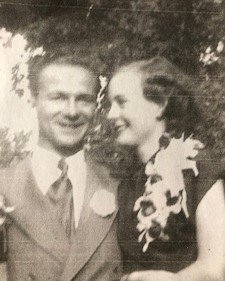 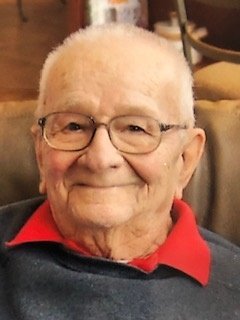 Vern was born in Longmont Colorado to Jake and Hazel Haas.  Raised a family and eventually moved to Denver where they resided for many years.

Vern enlisted in the US Navy when he was 17, they called it the “Kiddie Cruise” because of the age at the time of joining the service.  Serving from 1943 – 1947 during WW II.  Vern was honorably discharged as a Signalman, earning several awards including one for great marksmanship.

Vern never really spoke about serving during WW II as many that served did not.

Vern’s brother Kenneth (Kenny) also served in the Navy about the same time during WW II and was discharged as a radioman. The boy’s mother Hazel had 2 sons’ in the service during war time which must have been a very difficult time for her.

After serving his country Vern attended Denver University where he earned a degree of Bachelor of Science in Business Administration.

Vern married the love of his life Ruby on September 4, 1949 in Denver.  They went on to raise 3 children, Paul, Ken and Kay.

Vern worked a few odd jobs (including a creamery in Denver-where Vern ate most of the inventory, he said) and then was hired by the D&RGW (Denver Rio Grande and Western Railroad) where he worked for 32 years.  He retired as their General Pricing Manager of freight rates.  Oh, the many stories of work and great friendships that were formed during this time that lasted many, many years.  The business trips that included everyone’s family’s forging more great friendships to last a lifetime.

Vern never really had a bad word to say about anyone.  He was always interested in what you had to say and what you did, happy and loved a good joke – he could even remember the jokes to tell later.  Vern’s grandson’s Clint and Chad loved hearing them and always made them laugh so hard – it was hilarious.

Vern will be deeply missed by all that knew him, especially by his family. Such an honor and inspiration to have a wonderful role model as a husband to our mom Ruby, such a loving Dad and Grandfather to Clint and Chad, whom “Grandpa” loved dearly.  Knowing such a man with such compassion, drive, integrity and great spirit is remarkable and one that we all will treasure in our hearts forever.

Interment will be at Fort Logan National Cemetery with Military Honors.   (TBD)

Vernon will be joined by his wife Ruby at Fort Logan for their final resting place.

Preceded in death by:

To send flowers to the family or plant a tree in memory of Vernon Haas, please visit Tribute Store

Share Your Memory of
Vernon
Upload Your Memory View All Memories
Be the first to upload a memory!
Share A Memory
Send Flowers