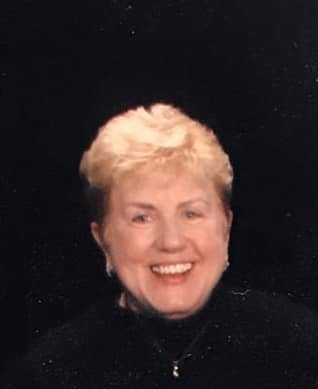 Vicki Lynn Bramblett McDonough was born on February 6, 1947 in Billings, Montana, the only daughter of a household of boys.  Her family moved quite a bit throughout the northwest when she was a child helping Vicki to learn the importance of keeping the important friendships she treasured throughout her life.  Eventually returning to Billings, Vicki could be found twirling her baton as she practiced for her role as a majorette in her high school marching band or watching the Denver Broncos with her mother and uncle.  Vicki took a break from Montana State University her sophomore year visiting Denver where she had her eldest daughter and eventually returning to begin a career at Boise Cascade lumber.  She enjoyed Denver and eventually meeting her future husband, James Thomas McDonough, Jr. (Jim).  Vicki and Jim moved back to Billings where they were married in 1974.  Together, the two began Jim's Conoco, the local gas station, auto repair and U-Haul rental shop.  They had two daughters and spent their time camping, snowmobiling and listening to what is now considered the golden oldies of country western music.

Divorcing in 1979, Vicki decided to go back to college even with 2 toddlers at home.  Even though she was a single, working mother, she was able to complete her bachelor's degree in counseling and a master's degree in Social Work.  She started her own career at that point, helping children with special needs and providing care and training to families all over the state of Montana.  She would drive her Buick Skyhawk in all imaginable weather and check in on these families and children.  During these single mother years, she doted on her two girls ensuring they had everything they asked for or could want including summer camps, cabbage patch dolls, and Espirit clothing. She would make big bowls of popcorn, turn on whatever her girls wanted to watch and spend hours rolling her daughters' hair in spongy pink rollers to ensure they looked their best for whatever important event was coming up.

She and Jim remarried in 1987 relocating the entire family to Littleton, Colorado.  They bought their dream home in Ken Caryl and settled down.  Vicki started her own non profit business, The Whole Family, and continued her work helping children and families.  She facilitated the placement of thousands of at-risk children over the years ensuring they were cared for and given the tools needed so they could grow into healthy adults, many times even helping to facilitate the adoption of these children.  Her business was also devoted to providing the resources needed for families of children with special needs to help them be able to have the tools to care for their children in home.

Although her work was always a passion and she was committed to making this world a better place, her heart was always with her children, family and closest friends.  Despite the many hours her company required and always being on call, she found a way to smilingly shuttle her girls anywhere they needed to be. She enjoyed hosting parties and gatherings and would shop until she dropped for special dinners or the perfect card or gift.  She was particularly always committed to having enough food for everyone and always worried there wouldn't be enough, making jokes about it all evening.  Cooking for her family was always a delight as she was known for her lemon cakes, lasagna, enchiladas and dips.  Her love of Lay's chips and "goop" is legendary and will always be a staple for all family gatherings. She was a lover of music and knew all of the words to all of the songs on the radio.  She may have even danced on the tables a few times during the rowdier St. Patrick's Day parties.  Sadly, Vicki was only born a wee bit Irish however, her family and friends know that at heart Vicki was all Irish with her love of that green isle.  She was able to spend two St. Patrick's days in Ireland with her husband and family and she considered Ireland to be one the most wonderful and beautiful places she had ever visited.

An avid sports fan, she watched tirelessly every season as the Broncos won and lost and would curse out Dan Reeves here and there to the surprise of her as well as her family.  Although football was her main enjoyment, she was regularly found to be cheering on the Denver Nuggets, Colorado Rockies and Avalanche and demanding that her family to change the channel "just to check the score."  If it was a particularly compelling game, she would quietly excuse herself and sit in her own room and watch games all night long, content with a bowl of popcorn and maybe some ice cream.

As she retired from her work and closed down her business, she devoted herself to caring for her husband after he became paralyzed.  Every morning, she tended to his needs and made sure he was healthy and sharply dressed and then would start her day. Even with the new challenges they faced, Vicki and Jim still hosted wonderful gatherings for those they loved.  They enjoyed sitting outside on their deck admiring the beautiful garden her stepson James (Jimmy), devoted many weekends to planting and lovingly manicuring and maintaining for them over the years.  As the family grew with grandchildren, Vicki turned her devotion to them, ensuring every child had their favorite foods, drinks, toys and shows on TV.  Vicki also spent many hours in her church and with the people of her church, making sure every potluck had enough food and providing help to those in need.

Vicki was a wonderfully kind, giving and loving soul who will be greatly missed.  Her love of life, and helping children and her ability to overcome adversities and challenges were some of her most wonderful qualities and the world is a little less bright and caring without her.  She was a devoted wife, mother, stepmother, grandmother and great grandmother to many.  She passed away after spending her last day with her closest family and friends, just 15 weeks after her beloved husband Jim left this world.

Vicki will be honored at Fort Logan on March 13th at 11 am.  A reception will follow at her and Jim's home at 11847 Idalia Street, (New) Commerce City, CO 80022 where they can host those they loved one final time.  Vicki will be partially interred at Fort Logan with her beloved husband and in Rosebud Lake, MT with those who predeceased her in life, her infant son and loving companion, Missy the Dog.  Vicki may have lived in Denver but her heart was always in Montana.  She would be so "tickled" to be back home again.

Share Your Memory of
Vicki
Upload Your Memory View All Memories
Be the first to upload a memory!
Share A Memory
Plant a Tree