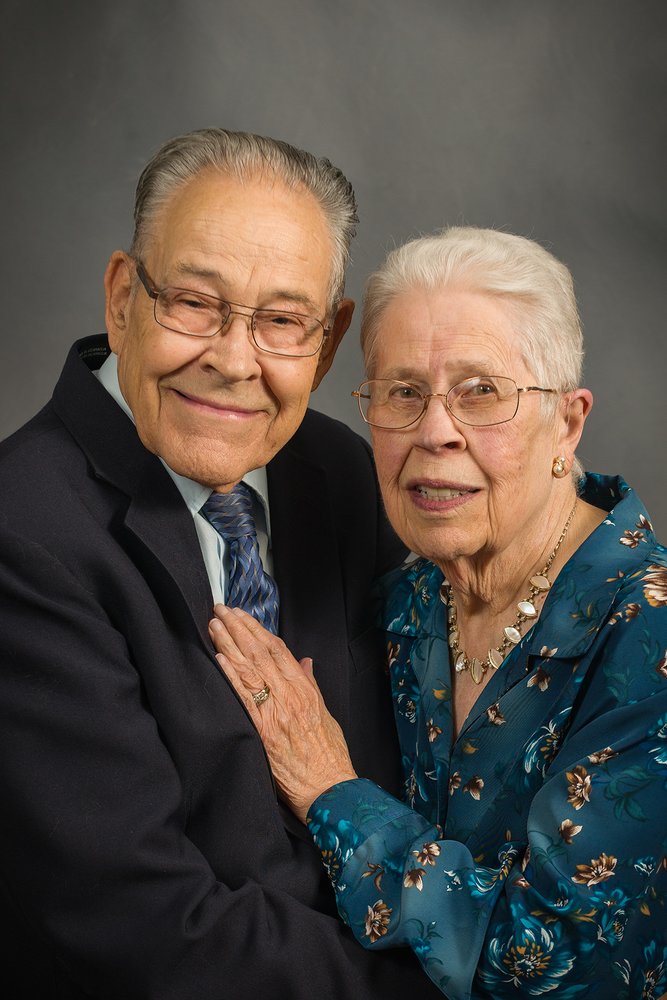 Lola Jean Schuyler was born to Zara and Rosa Moon on March 9, 1928 in a small house near Sterling, Colorado.  Her birth certificate states she was born “1 mile south”.  She graduated from Fort Lupton High school in 1946.  As a child, Jean moved between Sterling, Fort Lupton and Fort Morgan, Colorado as her father worked for the Great Western Sugar Company.  Later her husband, Lyle, would also work for the same company for the majority of his adult career.

She knew Lyle in high school but it wasn’t until after he returned from WWII that he became the love of her life.  They were married on September 20, 1946 and were together for 72+ years until Lyle’s passing in 2019.  Together they raised three children living in Fort Lupton, Windsor, Fort Morgan, and Sterling, Colorado.  They moved to Colorado Springs in 1994.  Jean mostly worked as a housewife but also worked a few campaigns in the Sugar Factory lab testing sugar beets for sugar content.  Jean had a green thumb for growing flowers and gardening.  She canned and froze fruits, vegetables, and all sorts of pickles.  She sewed clothes for her kids (and their dolls) and made Easter dresses and wedding dresses for the girls.  Jean enjoyed many different crafts and created many projects which are now enjoyed by her children and grandchildren.  After Lyle’s retirement in 1989 they took up many hobbies and crafts and created many beautiful works of art together.  Many stained glass projects were created and later in retirement they learned a new hobby, Intarsia, working with different species of wood that were cut into puzzle-like pieces that had to be carefully fit together to create beautiful 3D pictures.    Jean and Lyle made friends easily and were always willing to lend a helping hand.  She and Lyle enjoyed playing games and getting together with friends and family.

Jean was very involved in her church community, attending social activities, teaching Vacation Bible School and preparing church meals.  She was a faithful Christian who served God through her hard work.  She was a dedicated, long-time member of the Church of Christ.

She will be remembered as a loving wife, mother, grandmother, and great-grandmother.  She was a faithful and hard working Christian woman who kept an impeccable house, had a charming smile, undying support for her husband, and prepared her children for a Christian life.

Thanks to the loving and caring people at “A Robin’s Nest” and to Abode Hospice for the dedicated care shown to Jean and her family during this difficult time.  The family is grateful for the support and love shown by their church family at Pikes Peak Church of Christ.

To send flowers to the family or plant a tree in memory of Lola Schuyler, please visit Tribute Store

Share Your Memory of
Lola
Upload Your Memory View All Memories
Be the first to upload a memory!
Share A Memory
Send Flowers