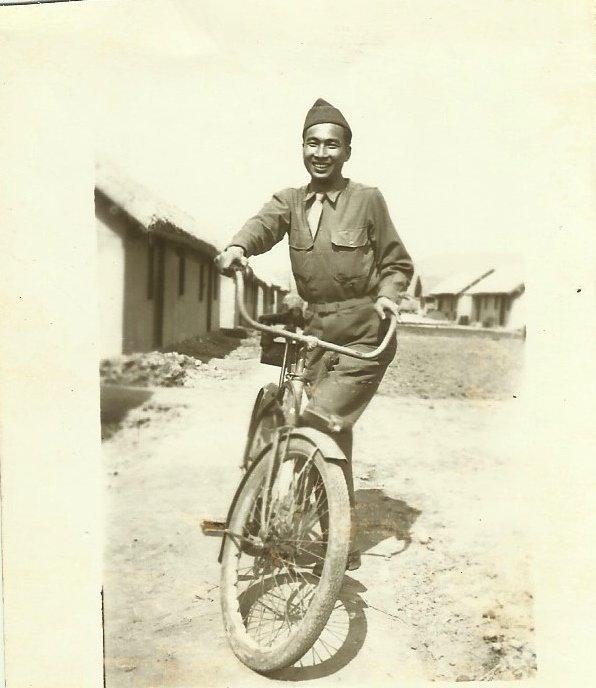 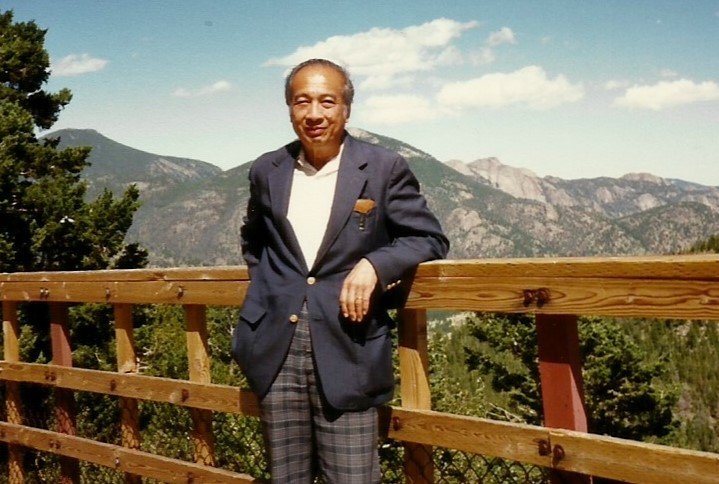 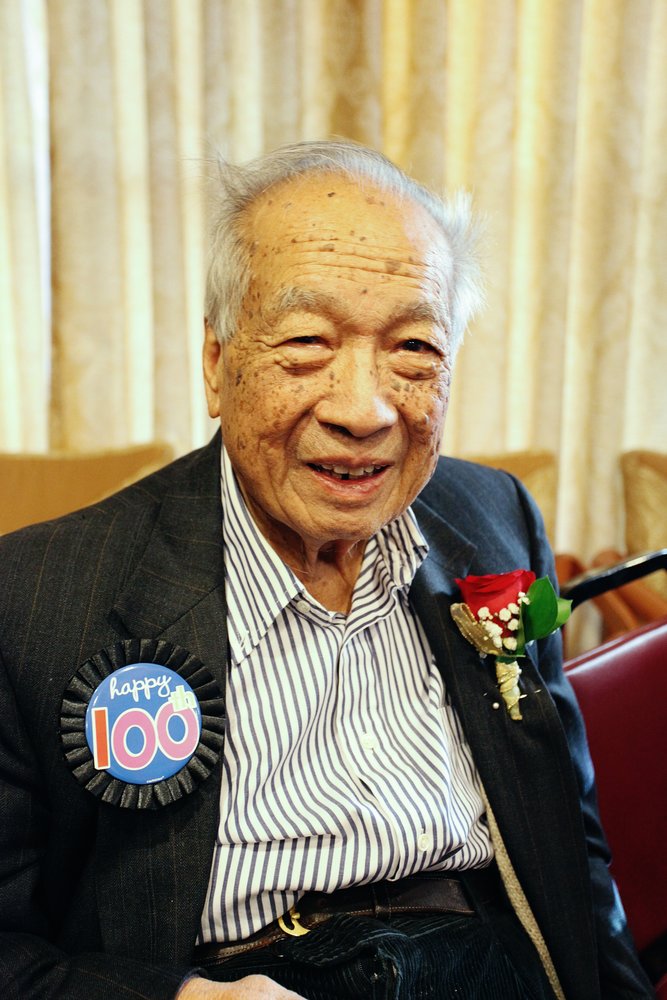 Frank C. Toy will be remembered as a man of gratitude and grace whose mantra was, “Things work out.” Surrounded by the love of his family, he died peacefully at home on Feb. 2, 2020. He was 105.

Born in China to poor silkworm farmers, fate and circumstance would take him far from his birth place. When he was young, his mother fell ill; to pay for medicine, his family arranged for a more prosperous couple to adopt him, a common practice in the villages. But in a twist of fate, the man who was to adopt him died. Instead, Frank was sent to the U.S. to live with the man’s brother to work at a bustling restaurant in Chicago. At the young age of 12, Frank left his family to take a twenty-day journey by ship to begin his new life with his adopted uncle. In December 1926, he entered the U.S. through San Francisco’s Angel Island where he was detained for nearly two months, spending Christmas and the New Year in detention.  After being processed by U.S. Immigration, he was allowed to proceed to Chicago by train.

Things worked out. In later years, Frank would talk about how his uncle loved him, letting him eat as much ice cream as he wanted after school and sending him money when he attended Purdue University. Throughout his adolescence and high school years, Frank worked at his uncle’s restaurant, the Limehouse, a hot spot on the north side of Chicago known for its food, dancing, and live music. He remembered that once, as a teenager, in the course of his job delivering Chinese food, he was pulled over for speeding. But when the police officer recognized him from the Limehouse, he waved him on.

After high school, Frank enrolled at Purdue University to study Civil Engineering. In an interview for Purdue Alumnus magazine when he was 101 years old, Frank recalled, “I never spoke about college to my uncle. When some high school friends decided to take a test for Purdue, they asked me to join in. Luckily, I got a scholarship.”

The Purdue Alumnus article goes on to elaborate his experiences as a student: “At Purdue he shared a house with other Chinese students. He remembers buying rice in 100-pound sacks and cooking chicken. For fun, they played Mahjong.” His love of Mahjong continued throughout his life, and he could often be found around a game table at family gatherings. As a Boilermaker, Frank was in the American Society of Civil Engineers; Chi Epsilon; the all-engineering honorary Tau Beta Pi; and Chinese Students Club. In 1939, he graduated third in his class of 56.

Despite graduating from Purdue near the top of his class, Frank struggled to find a company willing to hire a Chinese-American. A former professor suggested he go to graduate school, and Frank took his advice, earning a master’s degree in Civil Engineering from Pennsylvania State University. Yet even with his newly minted advanced degree, no one would hire him, so he joined the military.

Frank served in the U.S. Army from 1943 to 1946, earning two Bronze Battle Stars. He was stationed in China in WWII as part of the 1157th Signal Corps, an all Chinese-American unit supporting the Flying Tigers. His long journey back to his native country was a memorable one that began first by ship from the U.S. to India, then by rail across India, and finally by air, over the Himalayas to the city of Kunming, China. Frank was proud of his service and made an effort throughout his life to attend reunions with his Army unit.

It was in Kunming that he met his future wife, Judy, and her cousin, Jean. He and Judy married in 1946 in Hong Kong. When they returned to the US, Frank had a job at a mechanical and structural steel engineering firm in Indianapolis, lined up through a connection with a Purdue alumnus, but Frank and Judy were unable to find a landlord willing to rent to Chinese-Americans. They moved to Chicago instead and found a place near Chinatown. Frank and Judy started a family and were blessed with a son and a daughter. Frank was widowed in 1972 when Judy died of breast cancer.

In Chicago, for over 50 years, Frank spent his career at structural steel firms. When asked about the limited career opportunities for Chinese-Americans, despite his stellar academics, he responded, “That doesn’t matter as long as I could support my family.” Despite racial discrimination in employment and housing, Frank was able to draw on the personal connections he had built while a student at Purdue University in order to find jobs at pivotal points in his career. He was both grateful and proud to be an alumnus of Purdue University. Reflecting on his inability to find a job out of graduate school, and his decision to join the Army, he pointed out that the Army took him to China, where he met both his first wife and his second wife.

In 1976, Frank and Jean married. They enjoyed a long and loving marriage. After Jean’s retirement, they took several trips to Asia, and in 1995 they relocated to Superior, CO. They enjoyed hosting family gatherings, going out for Chinese food, seeing shows, taking trips to Las Vegas, and, when they lived in Chicago, attending Cubs games. A lifelong fan of Chicago sports, especially the Cubs, Frank’s loyalty was rewarded in 2016 when, at 101 years old, he watched the Cubs finally win the World Series. Things work out.

Most of all, Frank loved his family. He will be most remembered as a devoted husband, father, stepfather, and grandfather. He was always delighted to see any of his nine grandchildren and shared his fondness for baseball, Mahjong, and sweets with them. Gratitude was always a part of Frank’s makeup, and he appreciated the smallest gesture of kindness. He will be remembered by his family for his quiet wisdom, sharp intellect, service to his country, and his love of life. Frank leaves behind a legacy of generosity and loving-kindness that will live on in those who knew and loved him.

A Celebration of Life will be held on Feb 22, 1-3pm at Sunrise Senior Living, 400 Summit Blvd, Broomfield, CO.

Burial will be on Feb 21 at 10:15am at Fort Logan National Cemetery, 3698 S. Sheridan, Denver with a military memorial service. To attend the service, please enter at the North Gate off of Sheridan and park near Staging Area C.

Flowers can be sent to Sunrise Senior Living, 400 Summit Blvd, Broomfield, CO 80021, addressed to Frank Toy. Delivery is preferred on the morning of Feb. 22, so that arrangements can be included in the Celebration of Life.

To send flowers to the family or plant a tree in memory of Frank Toy, please visit Tribute Store
Saturday
22
February

Share Your Memory of
Frank
Upload Your Memory View All Memories
Be the first to upload a memory!
Share A Memory
Send Flowers