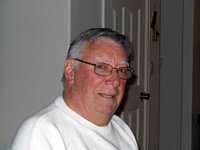 With profound sadness, we announce the passing of James (Jim) Thomas McDonough, Jr., our loving and devoted father and friend to all whose lives he touched, on November 11, 2019. He was 85 years young.

It is not lost on us, his family, that he lost his final battle on Veteran’s Day, a day he long-held sacred for those who he served alongside and those who were lost defending the country he loved.

Jim proudly served in the United States Air Force for 20 years stationed at bases in Denver, Colorado, Minot, North Dakota and in three bases in England. He was an instructor at Lowry AFB and was assigned to the Strategic Air Command as a Nuclear Weapons Technician and Inspector. He worked with bombs - big bombs - and his family nickname was “The Master Bombbuilder.” His family always threatened to have his tombstone read, “He Came, He Saw, He Bombed.” Jim loved to talk about his days in the Air Force; he loved managing “his men,” his missions, and his “missiles.”

After his years of service, he traded in his dress blues for a pair of overalls buying his own gas station in Billings, Montana. But that venture left his own tank empty, he needed more out of life so he tried his hand in retail sales, as a cross country driver of semi-tractors, even selling cars in Dallas.

He found his calling and second career as a Quality Assurance Specialist at the Rocky Flats Plant in Arvada, Colorado. He reveled in the science and the responsibility of his job. His long and distinguished career there was brought to a sudden end after a botched surgery left him paralyzed and unable to ever walk again. Ever the fighter, he took the doctor to court and won his case sending a message to the medical world, and more importantly to all who knew him, he was not going to give up on life.

Despite his disability, he refused to be a victim. Jim traveled to Glacier Lake, Alaska, Mexico, England, and to his beloved Ireland where he visited the family home and the old stomping grounds of his father near Knock, Mayo. He loved being Irish and he loved sharing that hereditary with his children. There was only one place to be on St Patrick’s Day - and that was at his house, eating corned beef and cabbage, listening to the Three Tenors and watching his granddaughters jumping higher and higher as they performed Irish Step Dance. If there was a whiskey, he’d sample it, if there was a Coors beer, he’d drink it. He never wanted to see another drink alone. He always had a tale to tell, a joke to share or a smile to warm even the coldest of hearts.

Born in sunny Los Angeles, California on November 24, 1933, Jim was the son of James and Nina and he was the family’s beach boy. He was the middle child, sandwiched between two head-strong sisters whom he worshipped until his death. He entertained his family of tales of his younger days growing up on the beach where he and his sisters shared sandwiches and the surf. Thank goodness there wasn’t any social media back in the day, he says, because the pranks they pulled would have landed them all in jail. He loved the water, he loved the feel of the salt on his face and he loved his “Pedro.” He grew to love the Rocky Mountains, but he was always California dreaming, returning often to catch up with longtime friends at the many reunions of the San Pedro High School Class of 1952.

He had a lifelong love affair with the outdoors; hunting, boating, and fishing. He also loved peanut butter and jelly sandwiches, hamburgers, chocolate milkshakes, ABBA, and the Denver Broncos. No fan has suffered or loved the team more than Jim. He cried when they won three Super Bowl championships and cursed them to damnation after any loss. The man bled orange and blue. No one except for perhaps Barack Obama was revered more by Jim than John Elway (though, he did question Elway’s fixation on building a defense at the cost of a good quarterback).

His happiest days were always - always - spent with his family. He loved to watch The History Channel and RomComs, host big family barbeques, arrange for monthly family gatherings at his favorite Mexican restaurant, El Jardin, and most of all sit in his favorite chair, even managing to nap despite the raucous laughter and conversation of his boisterous family. He taught his children that everyone has a voice, he probably didn’t anticipate just how loud those voices could be - or how impossible it was to try to silence them.

He was a rare combination of someone who had a love of life and a firm understanding of what was important — the simplicity of living a life with those you love. In his last year, his health took its toll, but not his spirit. He bought a pontoon boat so that he and his grandchildren could fish. He knew his days were limited, but he wanted them to be lived to the fullest.

He was preceded in death by his father and mother and former wife, Thelma McDonough, and infant son, Patrick.

Survived by his wife, Vicki Lynn McDonough, his daughters Gloria McDonough-Taub (Lewis Taub), Jamie McDonough (Jackson), Jodi McDonough (Joseph Gephardt) and his son, James T McDonough III (Courtney Drake-McDonough). He is also survived by nine grandchildren, his sisters Mary Lung and Barbara Watson (Robert Watson). He will be missed by all, but especially by the one who perhaps brought him the simplest joys, and wet sloppy kisses, his beloved dog, Maddie.

Burial services will be held at 1:00 pm, November 25, 2019 at Fort Logan National Cemetery. Following his service, the family will host a celebration of life at one of Jim’s favorite Irish Pubs, The Abbey Tavern 5151 E Colfax Ave, Denver, CO 80220. Attendees are encouraged to wear green, bring a big smile, and a great “Jim story” to share with all those who loved him dearly.  In lieu of flowers, please consider making a donation in his honor to the Patient Assistance Funds at Craig Hospital in Littleton, Colorado, one of the world’s top spinal cord and brain injury facilities.

To send flowers to the family or plant a tree in memory of James McDonough Jr., please visit Tribute Store

Share Your Memory of
James
Upload Your Memory View All Memories
Be the first to upload a memory!
Share A Memory
Send Flowers