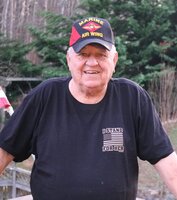 Allen “Ossie” J. Osieczanek of Strasburg CO. passed away peacefully June 15th, 2022 with his children at his side.

Allen was born February 27, 1934, son of the late Walter and Clara (Becker) Osieczanek. He graduated from Manitowoc Lincoln High School with the class of 1952. Allen immediately joined the United States Marine Corps and served honorably through 1955. He was employed at Imperial Eastman and held other jobs throughout his time in Manitowoc. He also played several years with the Manitowoc Chiefs as an Offensive Guard. Allen was a lifetime member of Manitowoc Amvets Post 99 where he served as a past Commander. He later moved to Colorado where he met his second wife Connie. In Colorado, Allen worked at as a machinist at Norgren. He loved sports, especially football and the Green Bay Packers. Allen was also a great story teller, he would keep you on the edge of your seat during most of his stories.

He is survived by his four children, Jim (Marianne) Osieczanek, Gina (Bob) Wolff, Lori, (John) Garcia, and Patti (Brian) Maedke, the mother of his children, Shirley Osieczanek, 9 grand chidren, 14 great grandchildren (soon to be 15), twin great great granddaughters, and many nieces and nephews.

A memorial service will be held at the Fort Logan National Cemetery in August.