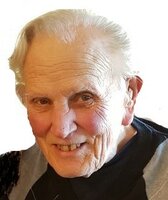 Paul Wildon Linville was born in Grove, Oklahoma, December 9, 1939, to Winfred Weldon “W. W.” and Lula Olive “Susie” Linville. He passed away in Westminster, Colorado on January 3, 2022. He was proceeded in death by his parents, W. W. and Susie Linville, his brother Charles Linville, his sisters, Jean Garner, Florene Stratton, and Lorene Price, his children, Adam Daniel Linville and Charity Lynn Linville, and his grandson Elias Gabriel Clark.

Paul’s mother was three years old when she traveled by foot to settle in the part of Indian Territory that became Grove. Here Susie met and married W. W. Eventually, they moved their family to Tahlequah, Oklahoma, where W. W. established Linville’s Jewelry and Susie ran the family farm. Paul, then called Wildon, roamed the hills barefoot, milked the cows, and delighted in his hometown. He especially loved getting a hamburger out the backdoor at Opal’s and going to the movies. After watching a double-feature, Paul would run all the way back to the farm and drink a gallon of milk. Perhaps that’s why he set a high school track record.

On December 27, 1959, Paul married Jewell Irene Holderby. He received draftsman training before signing with the US Airforce, where he monitored radar in Alaska during the Cold War Era. Paul was then chosen to train on new radar technology at a post in New Jersey. When his father’s health declined, Paul took an honorable discharge to help with the family business. His daughter, Paula Dawn, was born in Tahlequah. A few years later he moved the family to Missouri where he attended Midwest Bible College and his son, Curtis Weldon, was born. After pastoring in Wichita, Kansas the family returned to Tahlequah, where Paul served part-time with the Church of God (7th Day) and supported the work with a house moving business and employment at Box IGA. Paul and Jewell later divorced.

Paul married Cheri Lynn Lewis on November 24, 1989. They had two children, Adam Daniel, who was still-born, and Charity Lynn, who passed at 28. Paul raised and loved his three stepdaughters, Simri, Breelyn, and Emily Basset and enjoyed relationship with Cheri’s grown children, Curt Giles and Cindy Blair, their spouses Julie and Bob, and their children and grandchildren.

Paul and Cheri ran a non-denominational ministry where they fed the homeless of Tahlequah. Paul supported this work through employment at Tahlequah Lumber, a job he continued until he was 80 years old. He was known for keeping his Bible next to him in the booth at the gate and for praying for anyone who asked. Paul was honored to welcome sons-in-law Nathan Clark and John Dallis into the family and to be grandpa to his Oklahoma grandchildren, Elias, Lily, Daniel, Nathaniel, and Hunter.

As Paul’s health declined, Paul moved in with his daughter and son-in-law, Paula and Jerry Moldenhauer, in Thornton, Colorado. Here Paul studied Scripture and enjoyed his grandchildren and their spouses, Sarah (Moldenhauer) and David Grundy, Seth and Amanda Moldenhauer, Stephen and Maddy Moldenhauer, and Samuel Paul and Ariel Moldenhauer. He delighted in the antics of his great-granddaughter, Ember Grace, and was honored to participate in the welcome home celebration when his great-grandson, Killian James, was born. A few weeks before his death, Paul visited Curtis and Anne Linville in their mountain home. Their small town of

Gunnison reminded him of Tahlequah, which would always hold his heart. While in Gunnison, he enjoyed time with his grandchildren Caleb, Lydia, Luke, and Daniel Linville.

Paul passed away peacefully at St Anthony’s North in Westminster, Colorado. He was 82. His daughter, Paula, and grandson, Stephen, were allowed in the hospital room in Paul’s final days. His departure was full of faith, kindness, and courage. When Stephen asked how Paul felt about the doctor’s prognosis of death, Paul replied, “It didn’t bother me too much. I have a redeemer. My life has not been my own for a long time. He can have me whenever he wants me.”