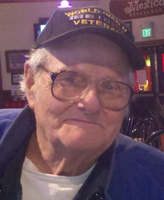 Walter Lynn Baldwin, 97, was born February 24, 1924 at Garland PA, to Lynn and Clara (Lamb) Baldwin. He passed away on January 25, 2022. He had close relatives of the Cornplanter Indians. He was the second oldest of nine children and grew up on various farms in the New York/Pennsylvania area along Lake Erie. He started full time work at 14, and was drafted at 18 into the US Army during World War II. He ended up in Okinawa awaiting the final push into Japan when the war ended and he was discharged but stayed in the Reserves. During this time, the US Air Fore split off from the US Army and Walt opted to go with the Air Force branch. He was recalled to active military duty during the Korean War era. He continued in the military and served two tours in Germany, learning to speak German fluently. He was a trouble-shooter for crypto-communications. His territory was western Europe, northern Africa and Turkey. After completing a tour of duty in Tan Son Nhut, Vietnam, he retired from the military. This comprised 25 years of service spanning from WWII to Vietnam.

Walt married Jean Hatfield in 1944 and they had three children. He divorced Jean and later married Evelyn von Diederich in 1964, who died a few years after that. He married Jennie Putnam in 1983.

After retiring from the military, Walt drove truck and held various jobs. Most of that time was as the Maintenance Chief for McDonald’s Bakery in Denver, CO. In 1991, he and Jennie moved to Van Aire, a private air strip community just north of DIA Airport. He was a life member of American Legion, VFW, The Retired Enlisted Association, Experimental Aircraft Association, Rams Rock and Mineral Club and Colorado Gun Collectors Association. He is survived by wife Jennie, daughter Judy, grandson Scott (Laurie) and various great and great-great grandchildren, one brother Robert, and two sisters Mary and Violet. He wrote his life story which is available on Amazon as “Walt’s Story” by Walter Baldwin.

Graveside services will be held at Fort Logan National Cemetery on February 8, 2022, at 10:00 am.

The service will be conducted by All Veterans Funeral of Denver, Colorado.

In lieu of flowers, please send donations to Doctors Without Borders (link shown below.) https://donate.doctorswithoutborders.org/secure/donate?type=tribute