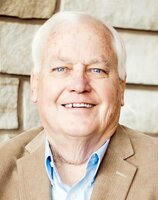 Richard Paul Gensmer died of Mesothelioma on October 9, 2021, at his home at Anthem Ranch in Broomfield, Colorado. He was diagnosed with Mesothelioma in May of 2020 and went through several rounds of chemotherapy and immunotherapy. Ultimately neither treatment fully cured him. The Mesothelioma was caused by exposure to asbestos when he was in the United States Navy where he served in the engine room of the USS Warrington, a destroyer dating back to World War II. He was in the service from 1964 to 1968, and his ship was sent to Vietnam in 1966-1967. Dick was also part of the Brown Water Navy and served in patrol boats (PBRs) on the rivers of Vietnam.

He was stationed at Newport Naval Station in Rhode Island. While in the Navy his squadron visited more than 40 countries and sailed all over the world. When deployed to Vietnam, his ship passed through the Panama Canal. A year and a half later the Warrington returned through the Indian Ocean and the Suez Canal, where it was part of the last military squadron through the Suez before the 1967 War. During his voyages, he crossed the International Date Line earning him the Order of the Golden Dragon and crossed the equator designating him a “Shellback”. Additionally, his squadron was stationed in the Arctic where he earned the Order of the Blue Nose, and he also earned the rare and coveted Order of Magellan for completely circumnavigating the globe.

“Dick” as he was known to his friends, was born May 8, 1946, in Beaver Dam, Wisconsin. Although he moved around as a small child, he largely grew up in Horicon, Wisconsin where he made life-long friends. He had fond memories of his time there and spend many happy hours camping and fishing on the marsh. During high school he was on the wrestling, football, and tennis teams.

After leaving the service he enrolled at the University of Wisconsin-Madison. It was during his first week on campus that he met a girl named Linda Rogers. They were married five years later. As part of his life-long love of science, he earned a Bachelors’ degree in Geology. He and Linda then moved to Illinois and while there he earned a Masters’ of Science in Geochemistry from Northern Illinois University.

Dick and Linda moved to Littleton, Colorado in 1978. He was the Division Engineer for Noble Drilling and joined a long-distance running club called Rocky Mountain Roadrunners, where over the years he ran competitively including multiple full-length marathons. In 1983 their daughter, Kristi was born and in 1985 they had a son named Steven.

In 1990 the family moved to Sugar Land, Texas. Dick changed careers and became an assessor for Lloyd’s Register, Quality Assurance, Ltd. By the time he retired in 2007, he had risen to the position of Operations Manager for the Western Hemisphere.

After retirement, Dick and Linda moved back to Colorado and purchased a house in the Anthem Ranch community. Dick joined many clubs and served on multiple committees within the community including the Board of Directors and received the Buz Smith award for his service. He and Linda enjoyed travelling in retirement and took multiple trips to Europe, including one to Ireland that was one of his favorite experiences.

Dick was preceded in death by his parents, Alvin Gensmer and Kathleen Gensmer Bascombe, and one of his sisters. He is survived by his wife, Linda Gensmer; children Kristi Gensmer and Steven Gensmer; granddaughter, Nia Martorano, five sisters, and numerous nieces and nephews.

In his honor a Ceremony with Military Honors will take place at Fort Logan National Cemetery on Friday, November 12th at 1:00 pm. Please gather at staging area A. A Celebration of Life is planned for 1:00 pm on Sunday, November 14th, 2021. It will be held at the Aspen Lodge at Anthem Ranch, 16151 Lowell Blvd, Broomfield, CO, 80023.

In lieu of flowers, the family has set up two tributes. If you would like, please donate to the Mesothelioma Applied Research Foundation:

Thank you so much,