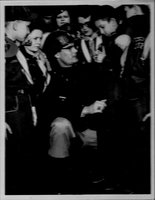 Marvin Tullius Scott (88 years old), born October 10, 1932 in Headland, Alabama, died at home in Arvada Colorado on June 30, 2021. He was surrounded by loved ones. He succumbed to small cell lung cancer after a 10 month battle. He leaves behind his wife Virginia Valencia (Marcinowski) Scott after nearly 64 years of marriage. He is also survived by his four children, nine grandchildren, and four great-grandchildren as follows:

Marvin grew up in Mobile, AL, an only child where he cherished his beloved Mother, Lucille. About 10 years old, he discovered a small boat covered in sand that he made his own. He took it to the nearby small islands, adventuring just like Huckleberry Finn. Marvin joined the Reserve Officers' Training Corps (ROTC) when he entered college at Spring Hill College in Mobile, AL. He graduated in 1954 with a degree in Political Science. He then went on to active duty with the Army. He was stationed as a guided missile officer at the Nike Missile Base in Fort Bliss, TX, where it was "hotter than hell and sand got in every crevasse.”

He was later stationed at the Nike Missile Base near Pittsburgh, PA, where he spent most of his four years of active duty. Marvin loved Pittsburgh because that is where "I met the love of my life.” He met his wife Virginia on a blind date, and it was love at first sight. "I knew from the moment I met her I wanted to marry her.” In fact, it was only their second date when he told Virginia that their children would be raised Catholic.

It was Marvin's desire to become a good provider for his future wife and children that led him to go on reserves and attend law school at the University of Alabama. He never mentioned the arduous courses he had to take, though he was an exceptional student. Instead, he remembered law school with great fondness. There he met Verbon Black, "the brother I never had.” Verbon taught him to be a gentleman and gave him sage advice that would advance his career.

Upon graduating in 1959, Marvin was admitted to the practice of law in Alabama (and later Nebraska and Colorado), where he became a Judge Advocate with the Army JAG Corp. He remained active with the reserves for more than a decade and met some wonderful people. During his time with the reserves, his duties included teaching military law at the Pentagon and at the National War College in D.C..

When asked, not long ago, if he enjoyed his time in the army, Marvin responded, "I really did. It taught me self discipline and I met some wonderful people.” Although he was on active duty during the Korean War, the most combat he saw was bar fights. He was, however, awarded one of the highest non-combatant awards, The Legion of Merit, Army Accommodation Medal (The Green Hornet). Marvin was honorably discharged from the Army as a full Colonel.

Marvin's civilian career was with the Internal Revenue Service as special trial attorney for the United States Treasury Department doing large case tax litigation. His two largest cases were the Howard Hughes estate, and McDermott Oil. During his carrier, Marvin discovered he enjoyed teaching, and when he and his family eventually came to Colorado, he taught business law at Regis University and Metro State College. He also enjoyed taking classes, and thus attended Colorado College where he received a doctorate.

Marvin loved riding bikes. He taught each of his kids, and later his grandkids, to ride. Each summer was spent vacationing at a family beach house in Panama City, FL. As the family grew with spouses and grandkids, the beach house seemed to shrink in size. For his 65th birthday, he and Virginia took their 4 children and their spouses, along with his 8 grandchildren on a week-long cruise to Grand Cayman Island and Cancun, Mexico. After retiring from the Treasury Department, he and Virginia joined the Friendship Force and traveled the world, making friends everywhere they went. Marvin also loved to grow flowers, a passion he obtained from his cherished mother, Lucille.

With nearly 48 years of sobriety, Marvin was a fervent believer, faithful member, and ardent supporter of AA. He sponsored several people and oftentimes manned the late-night hotline. Every year on his AA birthday, he would share his experiences and the embarrassments that led to his first meeting. "AA was the one thing that truly saved my life”, he would say. After his first meeting, he never looked back. He made many lifelong friends in the program.

He was an empathetic and ardent advocate of those he considered underdogs. He overcame struggles and admired and respected anyone who overcame their adversities as well.

Family was the most important thing to Marvin. It was important to him for his children, and later his grandchildren, to tap into their full potential and live successful lives. He was extremely proud of his family and all of their accomplishments. The barely audible whisper of his last dying words were, "I love you. I love every one of you.”

In lieu of flowers, the family requests that donations be made to: