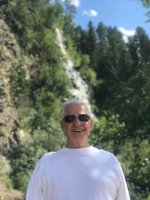 George was a great man that touched the lives of everyone he met and was loved by so many. He was his grandchildren's best friend and cherished more than words can describe. He will forever live on through this impact and memories left in his wife Joy, daughter Anna, grandchildren Brandon, Kara, Nikki, Ryan, Wyatt, Sammie, Jason, and daughter-in-law Cyndi.

George loved the lord and his motto was "We have to trust in God."

George Anthony Lepik enjoyed a long fulfilling life. He was born in Pueblo, Colorado on August 11th, 1939 and raised there. Early in life, George joined the United States Navy and was proud of his country. After getting home, he met the love of his life and was married in 1960 and soon had their pride and joy; a son Michael and daughter Anna. Once back in civilian life, George attended college in Pueblo where he received a bachelor's degree in Accounting and worked as a CPA. George then moved to Denver which he called home for the last 54 years. One of his greatest joys in life aside from his family was fishing and he loved every minute his line was in the water.

George went to be with the lord on March 30th, 2021. He was preceded in death by his son Michael and is now on his way to be reunited forever in God's grace.