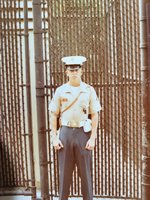 He discharged from the relm of this world one day shy of his original eas date, March 23, 1981. Simply put Chris said, "I have a day of leave to cash in so I am heading out early". Upon his arrival to heaven, he was greeted by his mother Peggy, who gave him a big hug and his brother, Eric who farted in his direction and said, "It is what it is". Peggy said "There's some guy here with a diamond on his chest asking for you". Chris proceeded to a duty desk and gave first SGT Schmuckatelli a Clint Eastwood scowl. The first SGT said "Report to the gate marine you have duty". Chris said, "Do'H!" which was promptly followed up with a duty belt and cammies thrown in his direction. As Chris stands watch at the gate in an overwatch position he will experience the utmost pride while he watches his daughter graduate with a doctorate in Clinical Psychology and continue on her mission to serve veterans in the years to come.

As the months follow and the allocated allowances take effect Chris will likely spend his uniform allowance on unnecessary things like moto gear or "really cool" Oakley branded wings. While on leave Chris plans to visit with the abundance of relatives from both the Johnson and Simpson sides of the family, seeking beans, red chili and sopapillas at every house. His mother Peggy will insist he sit with her watching Wheel of Fortune and peeking in on his children from time to time.

Per his daughter's instructions on his leave visitations, she said "You're free to visit but if you hear the walls a rocking don't come rapping, even gently rapping at my chamber door". While Chris continues venturing through eternity, he will check in with the duty desk from time to time awaiting his daughter's order to report to the gate. As he awaits his children, his brother Mike, and many other friends and family he will be wrapped with joy and love experiencing the eternity promised by his Lord and Savior Jesus Christ.

Start off each day making your bed and aim to make each day better than the last for a fellow skin and bone traveler.

We love you dad; we'll see you soon. Rest easy Marine, your brothers and sisters in arms have the watch.

In lieu of flowers please donate to a veterans housing organization near you.