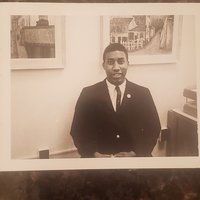 Foley Delbert Gordon, 76, of Portland, Oregon, passed away on Sunday, June 7th 2020, in Denver, Colorado. He had a history of respiratory ailments which contributed to his passing.

Visitation and memorial will be 10 a.m. to 12 p.m. at All Veterans Burial and Cremation. Cremation will follow services at the same location.

Foley was born in Portland, Oregon to William James Gordon, Sr. and Leola Waterhouse Ford on the twelfth day of August in the year 1943. He attended high school at Madison and developed a keen interest in sports, especially football. After graduating high school Foley obtained his undergraduate degree in Business Administration from Portland State College in 1965. He then pursued a professional career. Foley worked as a District Manager, for nearly 40 years, with various branches of the telecommunications industry such as Pacific Northwest Bell, American Telephone and Telegraph, and US West. His phone company career was interrupted when he was drafted to serve in the Vietnam war. He returned from the war having been awarded the Army Commendation Medal. Upon resuming his career he took an assignment with AT&T in Basking Ridge, New Jersey. It was here that he met and married Evelyn Louise Griffin on September 1, 1978. The couple moved to Seattle, Washington and two children were born into this union. A son, Terrence and a daughter Allison. Being a person always interested in self improvement and gaining knowledge, Foley achieved his MBA from City University in Seattle, Washington in 1984. Foley enjoyed multiple outdoor activities including skiing, fishing, camping, softball and riding his motorcycle. He also had a passion for aviation earning his pilot’s license and performing thousands of hours in the cockpit. He once flew his wife and children from Denver to the Grand Canyon for a family vacation.

He is preceded in death by his brother, William James Gordon, Jr. and both of his parents.

Foley is survived by his ex-wife, Evelyn Louise Gordon, and two children, Terrence and Allison Gordon.

Memorials may be delivered to 5803 E. 9th Ave., Denver, CO, 80220. Foley’s family wishes to extend their sincere thanks to the staff of The Denver Hospice, most notably, Michael, Jackie, and Don. Their sincerity and genuine dedication to providing heartfelt and professional service made a difference for Foley in his final days.