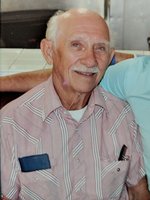 Albert “Sonny” Eugene Skidmore was born August 23, 1935, in Denver, Colorado to Albert Lee and Lola May (Booth) Skidmore. Sonny was the youngest of three children and a 4th generation native Coloradoan raised in Denver. Before completing high school, Sonny felt the call to serve his country. In February of 1954 Sonny entered the U.S. Marine Corps, at the height of the Korean War. He completed boot camp at Camp Pendleton, San Diego, and immediately shipped to Korea. After fulfilling his duty in-country, Sonny was honorably discharged in February 1957. Upon returning to Denver, Sonny met, fell in love with and married Valentine “Val” Hauert. As was fitting, their wedding was held Valentine’s Day February 14th, 1958. The Rocky Mountain News memorialized their wedding on the front page of the paper. Later that year, Sonny followed his father into the construction trades and joined Plumbers and Pipefitters Local 208.

In February of 1966 Sonny & Val adopted 4-month old Rennetta, then in November of 1967 they adopted 1-month old Rodney. Both were adopted from Colorado Christian Services. Over the years, Sonny moved the family from Lakewood, Colorado to Parker. He built a custom home where he and Val finished raising their family. In Parker he enjoyed building and tinkering with cars. In 1996, Sonny retired after 38 years as a pipefitter, to take care of his ailing bride when she was diagnosed with Lou Gehrig’s disease (ALS). Sonny devoted himself to her full-time care, until her passing in 2001, which marked 43 years of marriage. More recently, Sonny moved from Arizona to Southern California where he lived for the past 5 years.

Sonny was diagnosed with pancreatic cancer in May 2019, and passed away in the early morning hours of October 9, 2019, in Simi Valley, California. He is survived by his two children; Rennetta Nikolic of Denver, Colorado, Rodney Skidmore of Simi Valley, California, and his two sisters, Betty Eason of Tennessee and Mary Lou Woody of Arkansas. Sonny’s extended family include 6 grandsons and dozens of cousins, nieces & nephews.

Simi Valley Adventist Hospital was important in Sonny’s cancer diagnosis and care. In particular, Dr. Ira Tilles showed tremendous compassion. As such, the family requests tax deductible donations in lieu of flowers. Donations will be appreciated to help support the mission of this faith-based, non-profit hospital in bringing comfort to other families.